Allow us to introduce you to our latest tool, the Contrarian indicator. This tool was designed specifically to reveal imbalances on the lines of a game or match, especially when there is too much Public interest on one side of the game, which can lead to CONTRARIAN bets (i.e. placed against the Public).

Find out more how it works in the “How it Works” section here: 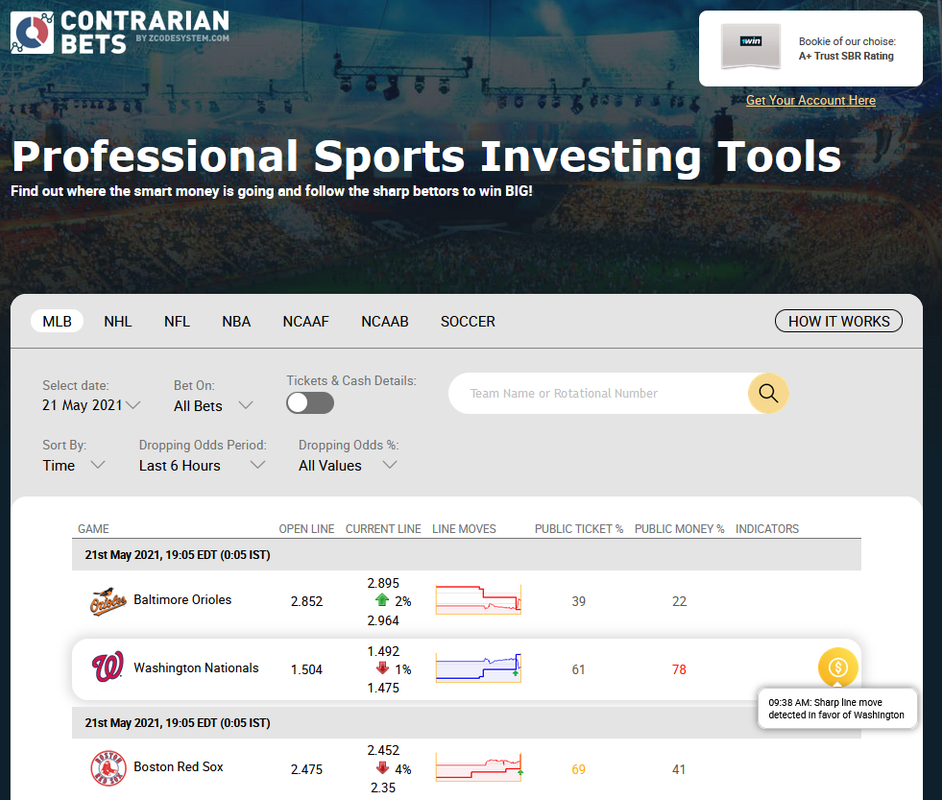 WHAT DOES CONTRARIAN MEAN: Contrarian betting, also known as betting against the public, fading the public or simply “going contrarian,” is a profitable betting strategy for one simple reason: more often than not, the Public loses in the end. In the betting world, being a Contrarian means betting against the public, the average Joes that usually pick games based on gut instinct, bias and rarely win. Year after year, Vegas and the sportsbooks make unfathomable amounts of money and the vast majority of the profits come directly from betting against the average Joe. As a result, the unpopular team getting the minority of bets provides much more value than the popular team getting the majority of bets. By going contrarian, bettors can extract additional value by capitalizing on public bias, taking advantage of shaded and inflated lines and getting better numbers in the form of additional points or sweetened payouts. Best of all, contrarian bettors place themselves on the side of the house. And in the end, the house always wins.

Now, those of you familiar with our Anti-Vegas tool will notice similarities with our Contrarian tool, such as the Line Reversals and Arrows which denote sudden changes in odds, etc. However, the Contrarian indicator goes further than just Line Reversals! Instead of displaying only public percentages, the tool provides you with detailed stats about the Tickets and actual Money ($) being laid down on either team, plus it also calculates interesting details such as ALL Public Ticket (which includes stats from both the Moneylines & Spreadlines), as well as Public and Cash ratios. When the Public Money percentage exceeds 85%, this means a new Contrarian opportunity has appeared and it will be denoted by the Contrarian icon.

You will also notice a new icon called the Vegas Trap, which indicates that this game is possibly being manipulated by Smart Money from the Vegas sharks & heavy hitters, in such a way as to lead the Public into placing their money on a bet which is most likely to fail, thereby making profits for Vegas in the long-run instead. When this icon coincides with the Contrarian icon for the same team, chances are the opposite team is almost guaranteed to Win!

TIP: You could use the Contrarian tool to directly place bets against the indicated team, but it’s also wise to take other factors into consideration before blindly placing your bet. For e.g., when the Contrarian icon appears on a particular team row, it implies you will bet AGAINST that team (usually the Favorite). But before you do so, take a quick look at the number of Tickets for that particular team, and if it exceeds the tickets for the opposing team, then bet ON the opposite team or player. This is just ONE of the ways in which you can use the Contrarian indicator as a filter or bet qualifier.

VALUE BETS based on Scores Predictor and Kelly Criterion

And finally, if you scroll below the main Contrarian table, you will notice another table with a summary of the best VALUE BETS that are selected based on our proprietary Scores Predictor and the Kelly factor. The Kelly Criterion is a bet-sizing technique which balances both risk and reward for the advantage gambler. It determines the optimal % of your total capital (bankroll) that you can bet on a single outcome or game. The Value bets listed in this table can be either on the Moneyline (ML) or the Spreadline. And the amount you must bet is indicated in terms of the Unit stake size, for e.g., if the ‘Optimal Stake Part’ shows 0.88 and you have calculated your Unit Stake size to be $100, then you must place 0.88 x $100 = $88 on that particular Value Bet