This is a very short period of the whole ATP Tour as we switch surfaces once again, this time moving to the grass court for the month of June. The characteristics of the grass are very different than other surfaces, except much faster play and very long rallies. In comparison to clay you can expect much higher service hold and less breaks by about 7%, from 75% on clay up to 82% on grass. There will also be twice as many aces as there are on clay.

Grass courts being the fastest on tour will benefit the big servers on tour as well as good net skills and drop shots. Most recently the likes of Federico Delbonis, Joao Sousa, Pablo Carreno-Busta, Alejandro Gonzalez, Dusan Lajovic, Blaz Rola and Victor Estrella Burgos have moved up the ranking during the clay season. Either way, I personally wouldn’t expect much from the on the grass. Usually players that do very well on clay, tend to do very badly on the grass courts as they don’t have the necessary tools.

Also, when you see names such as Volandri, Montanes, Haase and Davyedenko expect them to lose in straight sets. Haase himself said he will skip the entire grass court season while others have only played up to 3 matches in the past 3 years.

However there’s a number of players to watch out for when it comes to grass season. Small minority of players absolutely adore the grass season despite it being so short.

Statistically expect huge improvement in comparison to their previous results in the past weeks. Way up there on top of the list you have unsurprisingly the Pole – Lukasz Kubot, following him you will need to watch out for the likes of: Mahut, Mannarino, Becker, Hewitt, De Schepper, Lopez, Janowicz and the sadly lost child – Bernard Tomic.

Following the list of best improved grass court players, you have the list of losers who decrease dramatically on the switch of the surfaces. The list is topped by Andujar, Matosevic and Nadal. Then further down the list you can find Gimeno-Traver, Hanescu, Berlocq, Wawrinka, Gulbis, Mayer, Robredo, Nieminen, Ebden and Simon.

Although, you may still put your eye sight on Wawinka and Gulbis both with very good service game and net play – they should be looking to improve their grass court statistics. Wawrinka is a wild card for the Aegon tournament.

Overall there is 5 tournaments for Male’s ATP and 3 for female’s WTA. This is a very short season of the year but very profitable. First tournament starts on the 6th!

I expect to make roughly 80 units of profit on pre-game bets in the month of June and another 80 on live betting. Let’s hit it!

This between: cherry picks, sessions and pre-game bets. 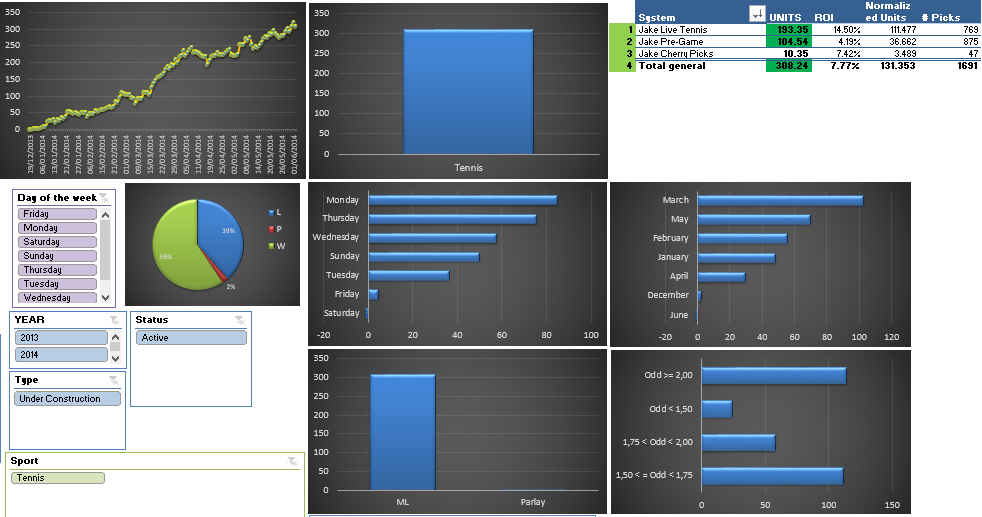