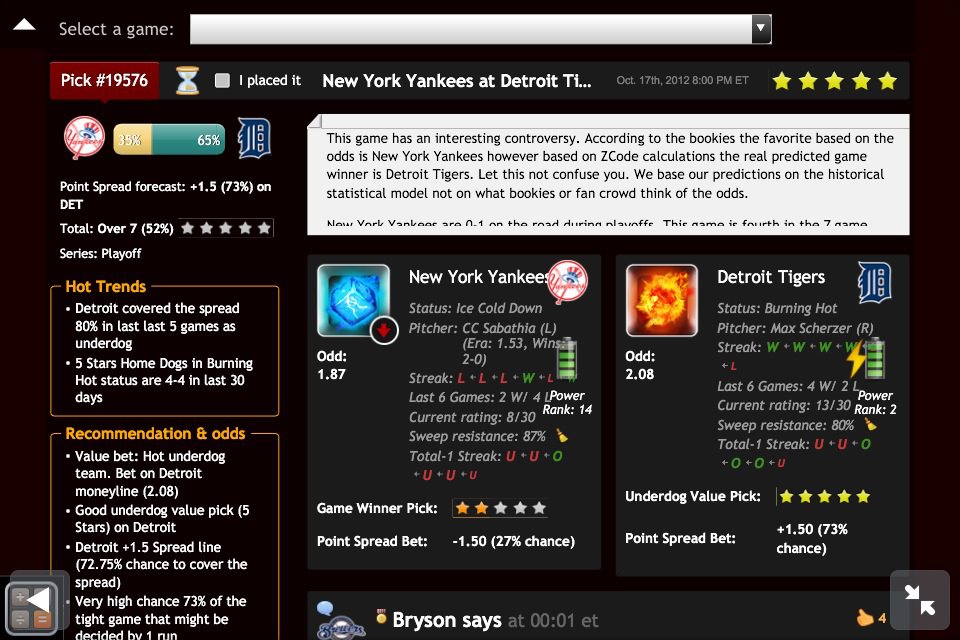 Z-Code is on a roll. The New York Yankees and Detroit Tigers series has been immensely profitable for all playoff systems. Here is a quick update on our success this week:

Z-Code got it right again. The 4-star under and ML picks came through again for big profits for the entire community.

We got it right again. Though I refused to go against my Yankees

, the under and TTU picks came through. Since the Yankees aren’t hitting, the under has been a proven money maker this postseason. Those following our over/under bets on the Yankees are up 27 units in the playoffs alone!

Prop bets are coming through. Because of the lack of runs, our published picks are up 18 units this week alone on Yankees, Giants, and Monday Night Football.

Jonny Ma’s tied inning system has been profitable due to the igreat pitching matchups.

It’s a great time to be in the Z-Code VIP Club. Still, the predictability of this series comes to a head in Game Four of the ALCS.

CC Sabathia gives the New York Yankees a significant pitching advantage over Max Scherzer. The Tigers are also slumping, with a good portion of their runs coming from a blown call in the 8th inning of Game Two. Still, the Yankees’ lineup has been historically bad this postseason.

Can the Yankees snap out of it an elimination game? Can Max Scherzer continue a string of successful outings? Can CC Sabathia stop the bleeding? Is all hope lost for the Yankees?

The under is no longer a clear signal on this bet.

In terms of my personal pick, I’m on the Yankees here. At even money, it’s hard to pass on CC Sabathia, even with the Yankees lineup as dysfunctional as it is. I think Sabathia keeps the Tigers under 4 runs.

Given how profitable the under has been this series, it’s hard to get off it. The same is true of team total under bets. I’m on the Yankees with moderate confidence and I’ll continue to ride the profit train until it crashes.