Premier League matchday 5 is headlined by one of the most exciting Merseyside Derbies in recent memory. First-place Everton host fifth-placed Liverpool with the former attempting to overcome a 22-game winless run versus the Reds.

The Merseyside Derby is the highlight of the weekend, but it isn’t the only big match. Let’s look at three matches for Premier League matchday 5.

Liverpool are coming off of a shock 7-2 loss to Aston Villa away on matchday 4. It was an incredible result that no one saw coming. Now, the Reds limp into Goodison Park to play the league’s top side, Everton.

Everton started the campaign well claiming a perfect 12 points from 12. They are one of just two teams not to lose in the league this season.

The Toffees have not beaten Liverpool in 22 straight games in all competitions. Their last win versus Liverpool came on October 17, 2010. The two teams will kick off 10 years to the day on Saturday at 12:30BST. Can Everton win? It feels like fate.

For and foremost, expect to see goals in this one. Liverpool conceded seven times versus Aston Villa. Their defence was awful and it may not be much better. Everton have scored 12 goals in four games and average 3.0 scores a game. This is a dangerous Everton team.

The Soccer Buddy app has predicted a 3-2 Everton win. If Liverpool’s defence is a shambles like it was on matchday 4, then that is a great prediction. Rather than taking Everton to win, however, play it safe with both teams to score and over 2.5 goals scored.

Result: Both teams to score and over 2.5 goals scored 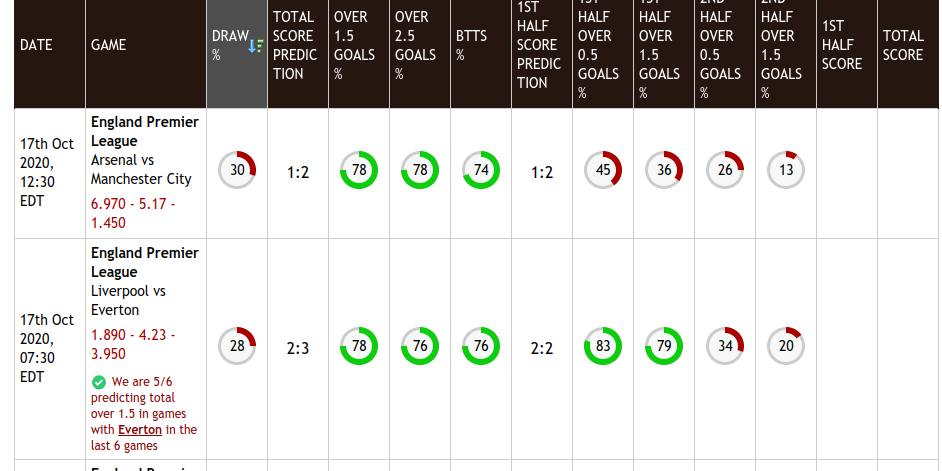 Another massive match in the title race takes place at the Etihad Stadium between Manchester City and Arsenal. Manchester City are winless in two straight games. They lost 5-2 to Leicester City before drawing 1-1 with Leeds United.

Keep an eye on Manchester City’s injuries. Raheem Sterling is nursing a thigh strain, Sergio Aguero isn’t fully fit from knee surgery, and Gabriel Jesus has leg problems. Manchester City may not have a true striker playing in front of goal.

History tells us that Manchester City will claim the win. However, injuries could play a big part. Also, the international break in October saw national teams play three games rather than two. Players have already played a lot of football, especially players at top clubs like Manchester City and Arsenal.

I’m playing this one safe as well. Soccer Buddy likes Manchester City, but I think those potential injuries could ruin the day for Guardiola.

I’ve picked two games with top sides clashing. Now, let’s look at a six-point match at the bottom of the table. Sheffield United host Fulham with both teams desperate for wins.

Chris Wilder’s Sheffield United are the better team going into this game. They have a strong defence, which hasn’t been the issue this term. The problem has been their goalscoring. The good news for Sheffield United was the signing of striker Rhian Brewster from Liverpool. He couldn’t play in Sheffield United’s matchday 4 game. He is now available and could get a goal to send the Blades to a win. 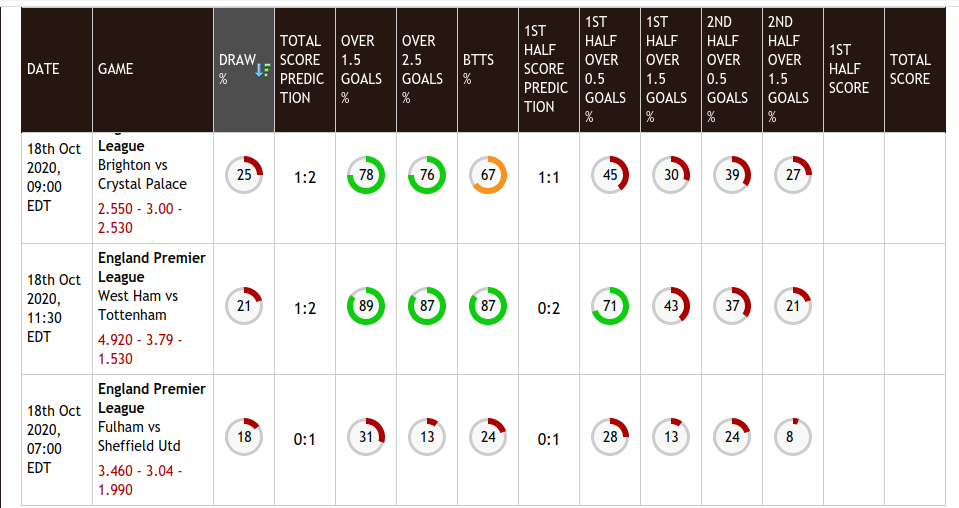 Fulham have conceded 11 goals and scored just three times. Expect Sheffield United to win a narrow game. Brewster could get his first goal for the team.