The FIFA Women’s World Cup 2019 kicks off on Friday night in Paris with France taking on South Korea. 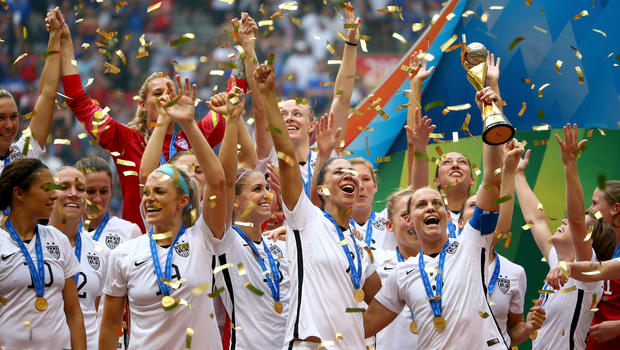 The hosts will have their hopes high going into the tournament but it will take a lot to knock off three-time winners the United States.

Twenty-four teams will play in this summer’s event with games being played between June 7th and July 7th with the final taking place in Lyon.

Who’s the favorite to win the FIFA Women’s World Cup?

France go into the tournament as joint favorites with the US. Both nations are +350 to lift the Women’s World Cup trophy. The French are playing on home soil and with a nation of hungry women’s soccer fans behind them, they could win it all.

The French women’s domestic league is one of the strongest in the world with many of the best female players heading to France to play.

The US are three-time winners and always have a strong team. The US are reigning champions having defeated Japan at the 2015 edition of the tournament. The Japanese won the 2011 event defeating the US. The two national teams have been dominant at the Women’s World Cup in recent editions.

Germany are +550 to win the World Cup while England are +600. The English are a strong team and will want to improve on their third-place finish from 2015.

France will take on South Korea in their first match of the Women’s World Cup. The two will play in Paris on Friday night, June 7.

The French have won six of seven international matches in 2019 while keeping three clean sheets. South Korea have struggled with a team that play their club soccer on the peninsula. The quality in the side is low and it has shown in poor results in 2019 (3W-1D-4L).

Norway and Nigeria play in Group A alongside France and South Korea. It is one of these two teams that will join France in the group stage. Norway won the 1995 edition of the tournament and finished as runners up in 1991. Their last few trips to the World Cup have seen them not make it past the Round of 16.

Nigeria have never made it out of the group stage previously. It is doubtful they have the quality to reach the knockout stage. Norway should get off to a good start with a win on matchday 1.

Two-time World Cup winners Germany clash with China in their first match. Germany have made it to the quarterfinals or further at every World Cup since it started in 1991.

China reached the final in 1999 but they haven’t gone past the quarterfinals in the last three editions. In fact, China missed the 2011 tournament.

China go into the Women’s World Cup having lost to France in their recent warm-up. They should give Germany strong competition. However, the Germans have plenty of quality and should come away with a win.

Spain will take on South Africa in the second match of Group B on Saturday. Spain have only qualified for two Women’s World Cup tournaments. Meanwhile, South Africa are playing in their first ever tournament.

Spain drew their two warm-up friendlies to Canada and Japan. South Africa go into the tournament having not won a game in 2019. The South Africans have not won any of their nine matches in 2019.