The NCAA football season rolls into week 9 with Alabama still claiming the No. 1 ranked position. The Crimson Tide is a perfect 8-0 this season and coming off of a 58-21 beatdown of the Tennessee Volunteers. 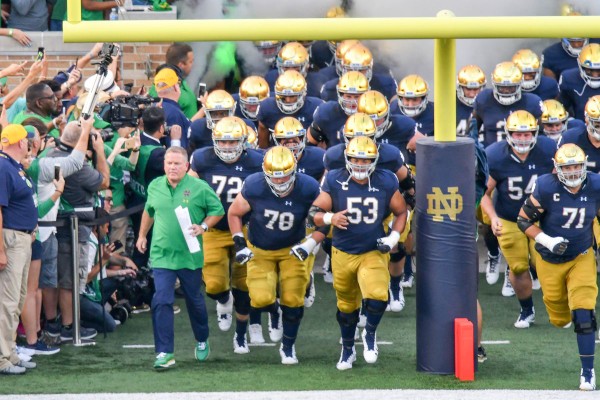 Saturday, November 3rd will see Alabama face its toughest opponent of the season as the No. 4 ranked LSU Tigers host the Crimson Tide. LSU is 7-1 going into the big SEC game having lost only to the Florida Gators this season. A win in Baton Rouge would completely change the makeup of the NCAA’s top 5.

Are the LSU Tigers legit?

The Tigers have not beaten Alabama since 2011. Their 9-6 overtime win came in Tuscaloosa. The Crimson Tide did get revenge weeks later in the 2011-12 National Championship Game. Alabama won 21-0 as LSU failed to show up for the marquee game.

Leading sportsbooks still see the Tigers as an outsider for the NCAA National Championship. LSU is +2500 to win the title. It is the seventh best odds currently.

Alabama leads NCAA football betting odds at -200. Each week Nick Saban’s team has strengthened the grip it already had on the title. The Crimson Tide started the season as +275 and each week those odds have dropped.

Can the Notre Dame Fighting Irish claim the National Title?

Compared to other teams in the top 5, Notre Dame has a soft schedule to finish the season. The Fighting Irish will play Navy, Northwestern, Florida State, Syracuse, and USC. None of those schools is ranked in the top 25. Despite the lack of quality opponents, Notre Dame can only beat those teams put in front of it.

The No. 5 ranked Michigan Wolverines are knocking on the door of the playoff places. Michigan defeated in-state rivals Michigan State last weekend and face No. 17 Penn State on November 3rd. The Wolverines have a far more difficult schedule than Notre Dame. Jim Harbaugh’s team must play the No. 17 ranked Nittany Lions before ending the season three weeks later against No. 11 Ohio State.

Notre Dame does possess a trump card over the Wolverines thanks to its 24-17 week 1 win in South Bend. Michigan is currently +1200 to win the NCAA National Championship. Could Michigan leapfrog Notre Dame by running the table and beating Ohio State in the final Big 10 game of the season? Harbaugh and company may not need to as Alabama or LSU could fall out of the top 4 after their massive SEC game.

And what about the Clemson Tigers?

After surviving a scare against Syracuse in which the Tigers had to come from behind, they have battered opponents. Clemson has outscored opposing teams 104-10 in its last two games. Florida State, Louisville, Boston College, Duke, and South Carolina round out the Tigers’ season. All are unranked currently. Clemson is +500 to win the National Title. 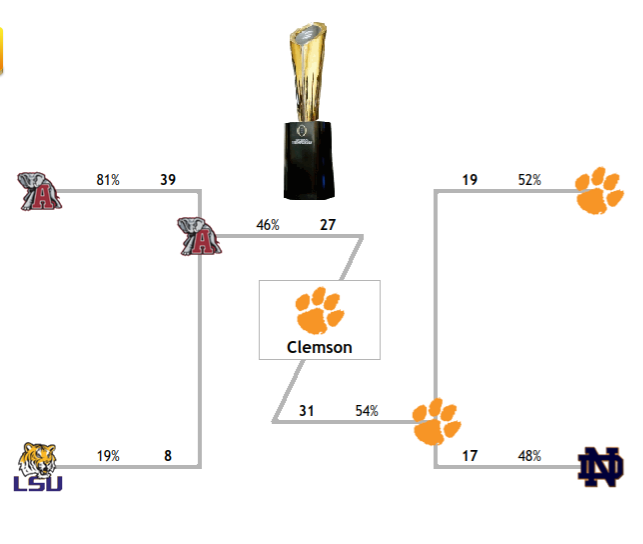