The NCAA basketball season has tipped off and one of the top 5 teams has already taken a tumble. The Kentucky Wildcats were blown out of the water by the Duke Blue Devils on opening night, 118-84. Coach Mike Krzyzewski has another fantastic team and according to CBS Sports’ daily NCAA basketball rankings, Duke is now the country’s No. 1 team. 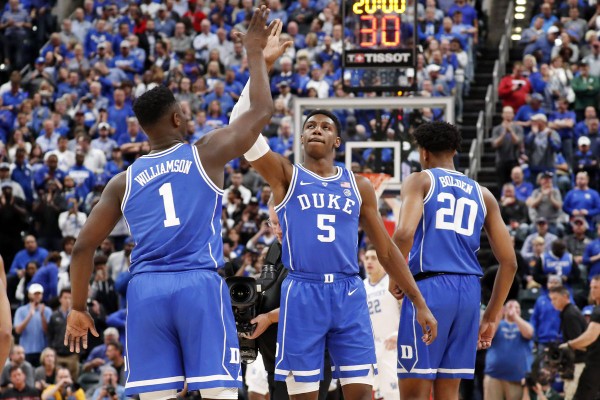 There is a lot of basketball left to play this season. So, which teams can bettors expect to be on top when March Madness rolls around?

Sportsbooks had the Blue Devils listed as the odds-on favorites to win the NCAA National Championship. Despite starting the season as No. 4 in the country, Duke turned heads with its opening night win over Kentucky. It wasn’t just a win, it was a statement of intent.

Duke last won the National Championship in 2015. It isn’t Coach K’s longest gap between titles, but it may be one of his last opportunities to win another. Coach K is now 71 and time is ticking on his career.

Bettors need to watch out for Duke’s ‘big 3′ of R.J. Barrett, Cam Reddish, and Zion Williamson. The trio accounted for 83 points against Kentucky.

So, Kentucky had the second-best odds to win the National Championship after Duke. Sure, those will take a hit after the school’s opening night loss, but there is a lot of basketball left to play.

Kentucky’s next five games should be walks in the park and by the time December rolls around, the loss to Duke will be nearly forgotten. John Calipari will get his Wildcats on track and a No. 1 seed in the NCAA Tournament is highly likely.

The Kansas Jayhawks downed No. 10 Michigan State, 92-87, to open the season. Ranked No. 1 in the nation ahead of the game, Bill Self has another talented team at his disposal. Center Udoka Azubuike is highly thought of by basketball insiders and he is believed to be the key to Kansas’ offense this season.

In the 22 years since the formation of the Big 12 Conference, Kansas has won 18 regular season titles. The school has added 11 Big 12 Tournament titles to that number. The Jayhawks will once again have their way with the conference with the real challenge coming in the NCAA Tournament in March.

Every year, pundits, bettors and general NCAA basketball fans rave about Gonzaga. They continually proclaim this year will be the Bulldogs’ season. Yet for all the praise and hyperbole, Gonzaga has still never won an NCAA National Championship. Just one time (2017) have the Bulldogs made the National Title Game. Plenty of bettors go hard on Gonzaga, but end up losing in the end. Will this year be any different?

The Bulldogs beat Idaho State on opening night 120-79. In their first four games, the Bulldogs will play Texas A&M and Illinois. Of course, they play in the West Coast Conference, which will inevitably be won by the Bulldogs.

Gonzaga has won the last six WCC regular season titles. Expect Gonzaga to promise so much and deliver little in the end, in terms of national titles.

Will any of these teams be left standing at the end of the NCAA Tournament? Or will another team rise to the occasion?