I think some of the best matchups were missed this year by a committee that made some very interesting regions and top seeds. That said, nobody in the field is overwhelmingly strong this year. As such, I think senior leadership and knowing how to win will be important – as always. Here are our 2016 March Madness predictions.

I like UConn in my 8 v 9 matchup, but otherwise I’m all chalk here. I’m not sure how Villanova and Philadelphia are a southern team, but it makes for an interesting Elite Eight game if Kansas and Villanova can run the table. Ultimately, I think the Kansas Jayhawks are the best team in college basketball and I expect them to squeak through to the Final Four.

Again, I’m a little disappointed with how this bracket shook out, but UNC has a nice path to the Final Four and I’m a big fan of this team. They’re well coached and they are battle tested. Again, I don’t have too many surprises in this field. I think Notre Dame is pretty weak and I think Kentucky could make this bracket interesting, but I expect UNC to take this one. Xavier and West Virginia are pretty strong examples of why this year’s field is not particularly strong. Everyone is good, few teams are great. I like UNC.

I get a little funky out west this year and I view this region as potentially the most competitive. I love the Texas Vs Texas A&M matchup that is shaping up for the second round if both teams can win. I think Oregon is a beatable top seed. I’m very impressed with Oklahoma and their senior leadership, but in the end I like Duke to come out of the region. Coach K will have his team playing at a high level and I think they can sneak through in my upset pick of March Madness.

I like UVA and thought their ACC run was incredibly exciting. I also like Michigan State. As a result, I’ve got a 1 vs 2 Elite Eight matchup in this bracket. That said, watch out for Seton Hall and some unlikely teams out here. Either way, I’ve got UVA making the Final Four.

I like Kansas this year to win the NCAA March Madness tournament. I think they’ll take out whoever wins from the West and I just think they’re better than Oregon, Oklahoma, or Duke. On the other side, wouldn’t a UNC vs UVA rematch be exciting? If so, I like the North Carolina Tarheels to make the Championship game. When it comes down to it though, I’m on Kansas to win it all. I think they’ve got the most talent and right now I think that’s enough to rise above a relatively level field. 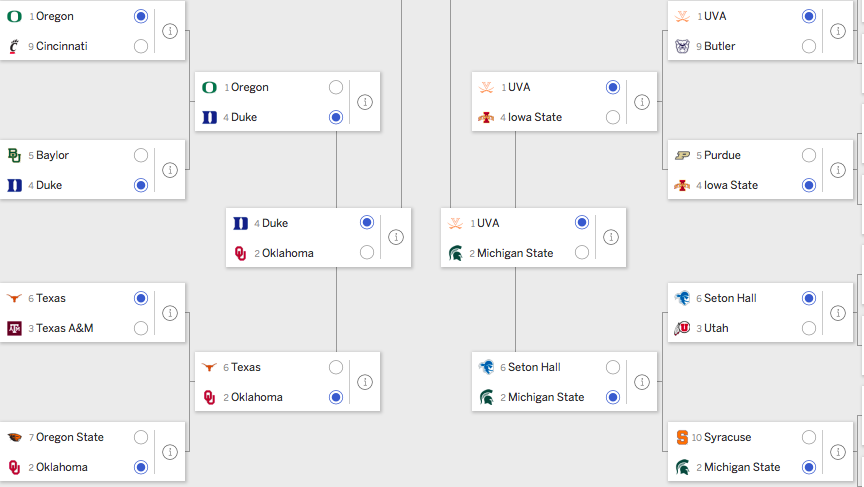 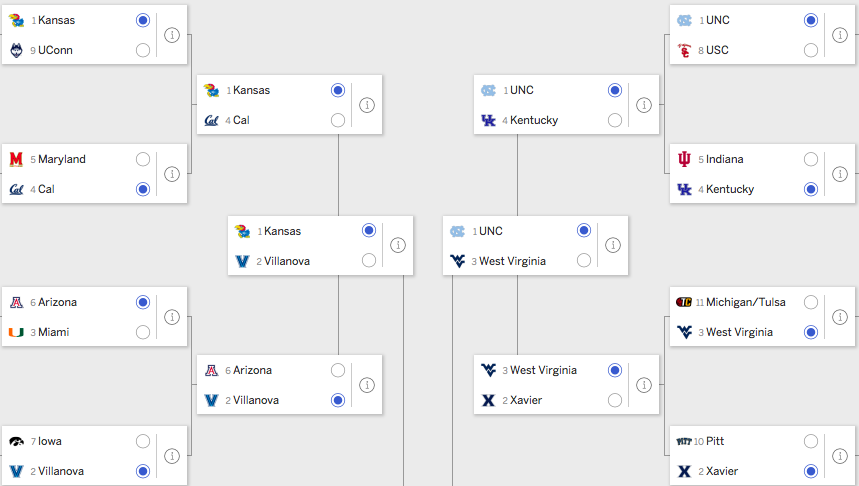